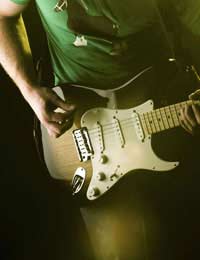 Perhaps even more than the 1960s, the 1970s was the era of the guitar hero; it was the central instrument of rock, and those who played it superbly were idolised. By association, collectors and investors clamour to own instruments played by the famous – it’s a way of feeling closer, and hoping the magic might transmit itself to their fingers, or simply to own something from a particular recording or artist.

Some big stars, like Eric Clapton, will sell instruments at auction (in his case it was to raise money for his charity); others will donate an instrument for a charity auction. Guitars are the most popular, since they’re very portable and easily displayed, but very occasionally other items will come up, like drum kits or even Hammond organs. Those, however, are few and far between; it’s the guitars that are in demand.

If you’re looking to invest, your best bet is to bid at an auction where an instrument has been donated, rather than an auction of guitars. The chances are that it won’t attract as many bids – indeed, many people might not even know it’s on offer. By way of example, a Scottish restaurateur paid just over £9,000 for a guitar owned by Ronnie Wood, of the Faces and then the Rolling Stones. A day later, a Stones fan offered him £35,000 for the instrument (he didn’t sell it).

The big money has come with a couple of auctions of guitars owned by Eric Clapton. Brownie, the instrument he used on the classic song Layla, brought £313,000. Yet that price was dwarfed by Blackie, a guitar he used often on stage, which fetched over £450,000, which made it the most expensive guitar ever sold at auction.

Of course, these instruments are beyond the reach of most people – even a lesser instrument given to Clapton by a fan fetched £12,000, and a Gibson 335 reached more than £400,000.

You can find more affordable instruments – again, largely at charity auctions, either in person or online – that are designed or signed by musicians. Granted, these aren’t quite the same thing, but they are unique, and have a strong collectable value. Depending on the name attached (an auction to raise funds for Rock the Cure featured guitars designed by Mick Fleetwood, Jeff Beck, Rod Stewart, Cheap Trick and many others, for instance) you’ll be paying in the low thousands, but your purchase will have a good resale value.

But you also need to distinguish between musician guitars and those that are purely collectable. There are plenty of those out there, along with Fenders, Gibsons and Martins designed by top musicians, and with their names attached to them. They might have some of the kudos, but nowhere near the value, although, if they’re limited editions, can make a reasonable investment – but be aware that you won’t realise a huge profit on them.

The only place you’re going to find guitars is at auction. Some will be on eBay – they host a few charity events, which are usually live online auctions. For the big-ticket items, however, you’re looking at the major auction houses, like Christie’s, although you can find instruments offered by some smaller houses.

Inevitably, guitars offered will have some authentication. If an instrument you’re interested in doesn’t have any, walk away – to all intents and purposes, it’s just another guitar.