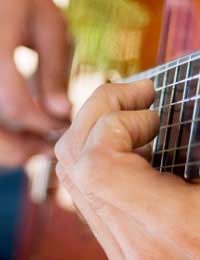 The British blues boom was the fuel for the 1960s rock explosion in the UK. Some many of the musicians who’d make an impact in the era came out of it – not just the Rolling Stones, for whom blues was the root, but Eric Clapton and the members of Cream and early Fleetwood Mac, which coalesced around the guitar talents of Peter Green, who’d served his apprenticeship (as did Clapton and many more) with Godfather of British blues, John Mayall (although the contribution of Alexis Korner to the making of blues in England can’t be overstated).

But although it was a vital part of the music and a scene unto itself, it’s largely been ignored, especially in memorabilia circles, which seems a little odd. After all, it’s a time that captures many greats during their formative years.

What British Blues Memorabilia Is Available?

The truth is, there’s not a lot of memorabilia pertaining to British blues as such, although posters from various blues events, such as the 1969 National Blues Convention, although that focused more on acoustic blues, do crop up occasionally (on the plus side, the genre isn’t popular enough to encourage copying, so you’re reasonably sure of an original). People might also put vintage blues magazines up for sale, such as copies of Blues Unlimited.

There were a number of specialist blues record labels, probably the foremost of which was Blue Horizon, which was founded by blues lover Mike Vernon. Although best known as the home of early Fleetwood Mac, the label actually wasn’t widely distributed until 1967, making its first releases from 1965 and ’66 quite rare and collectible. Of course, these were vinyl records, and rarely come up for sale these days. Even post-CBS material from Blue Horizon on vinyl records (much has been reissued on CD) can be worth collecting for the true blues aficionado.

Many of the acts were signed by mainstream record labels, however, so although there’s plenty of material available on vinyl if you look hard, it’s not extremely collectible.

The Problem With British Blues Memorabilia

Although there was a British blues 'scene', the bigger performers, blues players though they were, remained a bit apart from it. So there might have been posters for the Rolling Stones playing out regularly in Richmond (worth a fortune if you ever find one) and John Mayall’s Bluesbreakers with Eric Clapton (much the same), so the focus is on the performers, not so much the scene. In fact, the blues scene gigs where performers came together were mostly smaller names and acoustic musicians, such as Ian A. Anderson and Mike Cooper.

Few posters survive from the era, in large part because British blues was outside the rock and pop mainstreams. The big names could draw audiences, but even John Mayall with Clapton was still mostly just playing clubs – a point worth recalling – and in their blues days, before they went pop, the Stones were also just a club act.

America blues acts did tour, really beginning in the 1950s, and again, poster occasionally surface, which is the extent of memorabilia available.