Home > Ask Our Experts > Kendo Nagasaki's Mask, Could it be Valuable?

Kendo Nagasaki's Mask, Could it be Valuable? 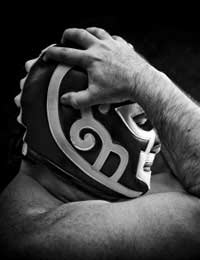 I'm writing on behalf of my Mother. She owns a mask. Kendo Nagasaki was unmasked in front of 14 million viewers in the Civic Hall, Wolverhampton, in 1977.

This was a ceremonious event, the mask was removed and then placed in a silver basin and burned by Gorgeous George Gillott.

My Mother has the mask that was removed in the ring, partially burned, given to her in 1977 by Kendo Nagasaki (Peter Thornton) himself.

It has been kept in pristine condition, bar the burn marks from the ceremony. With the possible intention of selling to a genuine collector, my Mother wanted to enquire how valuble this one of a kind would be?

Well, you have one of the Holy Grails of professional wrestling there, and something many people believe was destroyed. To know it exists will please a lot of fans, and it might well attract a number of bids at auction from collectors.

For those who don’t know, Kendo Nagasaki was the ring name of Peter Thornley, and for almost 20 years he was probably the best-known name in British professional wrestling. His mask was his trademark right from when he started out in 1964, although he did actually lose it a couple of times before the occasion you describe.

The first was during a 1971 bout with Billy Howes that was televised, and the incident was not intentional, whilst the second occurred in another match on television, this time against Big Daddy. The big ceremonial unmasking you describe was a major TV event, and “Gorgeous” George Gillette performed the honours, after which Thornley made some unmasked appearances before he had to retire for a while on the advice of his doctor.

However, the mask came back in 1986, and a year later Thornley achieved a career pinnacle by besting Wayne Bridges to win the WWA World Heavyweight Championship. In 1991 he was unmasked once more, in the middle of a bout with the wonderfully-named Giant Haystacks. Two years later he went back into retirement – by that time he was 47 – and he’s made a few appearances since, finally returning to the ring again as part of a deal with LDN Wrestling, which isn’t bad for a man now in his 60s.

That’s an impressive career for anyone, and certainly enough to make him one of the legendary figures of the sport, from the early days when wrestling was an integral part of Saturday afternoon TV sports viewing to the multi-million pound business it is today. He’s not to be confused with the American wrestler who uses the same name, but doesn’t wear a mask.

As to the value of that mask, it’s difficult to establish, since there’s no real precedent. The biggest factor will be the demand, of course, so you’d be best served by putting it in a reputable sports memorabilia auction and informing the wrestling magazines it’s being offered for sale. The more provenance you can offer, the better, as a way of establishing the authenticity of the mask. A signed letter from Thornley would be ideal, especially if accompanied by photographs of him giving the mask to your mother. The other thing that will influence the price is the condition of the mask itself, and how much it had been burned. Good luck!.

You might also like...
Share Your Story, Join the Discussion or Seek Advice..
I'd like to inquire as to the value of a genuine wrestling belt given to me personally by Big Daddy's wife, Shirley Crabtree for a school project in 1995. It is fairly large and made from a very heavy metal with a fabric waist belt and metal clasp. I also have several wrestling photos signed by him and I'm starting to wonder whether they are perhaps a valuable item that should either go to auction or perhaps a sports museum? Any help is much appreciated! Thanks Stacey
Stacey - 8-Aug-17 @ 5:02 PM
Hi, My brother was doing a house clearance, and he came across a old magazine picture of the Beatles which is signed with all 4 signatures. How will i know if its real or not? I told him i'll have it, and he just gave it to me! What do you think i should do with it? Cheers
MJ - 25-Nov-15 @ 8:48 PM
i have just come across this after googling Kendo Nagasaki masks. I like many fans have a collection of his masks that are now available for fans to purchase. I also have a one off 50th anniversary mask that I won at a celebration at his home. I will not sell it, but have been offered in excess of £1,000 for it. if the above mask is still in your mums possession I'm sure it would fetch a higher price. Despite the fact that he has been retired for many years, there is still a lot of interest in him.
BuckTaylor64 - 9-Apr-15 @ 3:11 PM
Title:
(never shown)
Firstname:
(never shown)
Surname:
(never shown)
Email:
(never shown)
Nickname:
(shown)
Comment:
Validate: