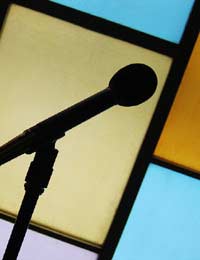 As the 1970s turned into the 1980s, the record market continued to grow. That meant more records sold, and more discs earning gold and platinum awards. For collectors, that means more opportunities to get your hands on one.

Additionally, more labels introduced “in-house” sales awards. These are very different from the RIAA award discs, since they didn’t necessarily celebrate the same milestones, but were actually little thank-yous and incentives for staff, which makes them worth a great deal less when sold.

During the latter half of the 1970s, award discs had been in the floater format, where the award plaque and reproduction of the album cover were raised, appearing to “float,” with a black matte. Around 1980 that changed to the “strip plate.” This is essentially the same as the floater, the big difference being that the album cover and the award plaque are on a single strip.

This lasted until approximately 1984, when it was replaced by the hologram style. In this, the logo for the RIAA is in a hologram style, and separate from the rest of the plaque. The frame of the award is generally black. Somewhere around 1988, there was a change in the RIAA logo, too. Where it had previously been circular, it now took on the generalised shape of an R.

There are also RIAA custom awards, which are very scarce, but can still be identified by the RIAA logo.

These are important to know, not only for giving a rough date to the award, but also as a way of authenticating it. If, for example, you’re looking at an award for a disc released in 1989, but it’s in the strip plate style, you know you’ve got a fake on your hands. However, in most instances, the cost of creating a fake isn’t going to warrant the return a forger would collect.

Awards from the BPI (British Phonographic Industry) only began in the 1970s, and only rarely come on the memorabilia market. In the 1980s they were based on unit sales, and it wasn’t until 1987 that multi-platinum awards were issued. They’re relatively similar in design to the RIAA awards, but use a red matte, with the BPT logo on the plaque.

The sheer number of discs earning gold and platinum status means that prices for 1980s discs are going to be lower. There will be a few exceptions, of course, such as Bruce Springsteen, whose award discs should be expected to go in the £2,000-3,000 range. But even an iconic figure like David Bowie tends to top out around £1,000.

Curiously, you find very few award discs for Michael Jackson or Madonna, two of the top-selling artists of the 1980s, on the market. However, a Canadian “diamond” sales award for Jackson’s Thriller was offered by one dealer, for the surprisingly low price of £250. This isn’t so much because sales had devalued price, but rather that this award simply didn’t have the cachet of something from the RIAA.

As a general rule, you can expect to pay in the region of £300-700 for award discs for most artists.

In most instances, you’ll be buying these items from dealers. The relatively low prices mean they won’t really come up at auction – there’s not enough profit involved – although that might begin to change for a few 80s artists over the next decade. The 1980s are still too close for the majority of items to have acquired significant value yet.

Beware of award discs on eBay, and if you’re considering bidding, insist on authentification.